Aussies already lost $242M to investment and crypto scams in 2022 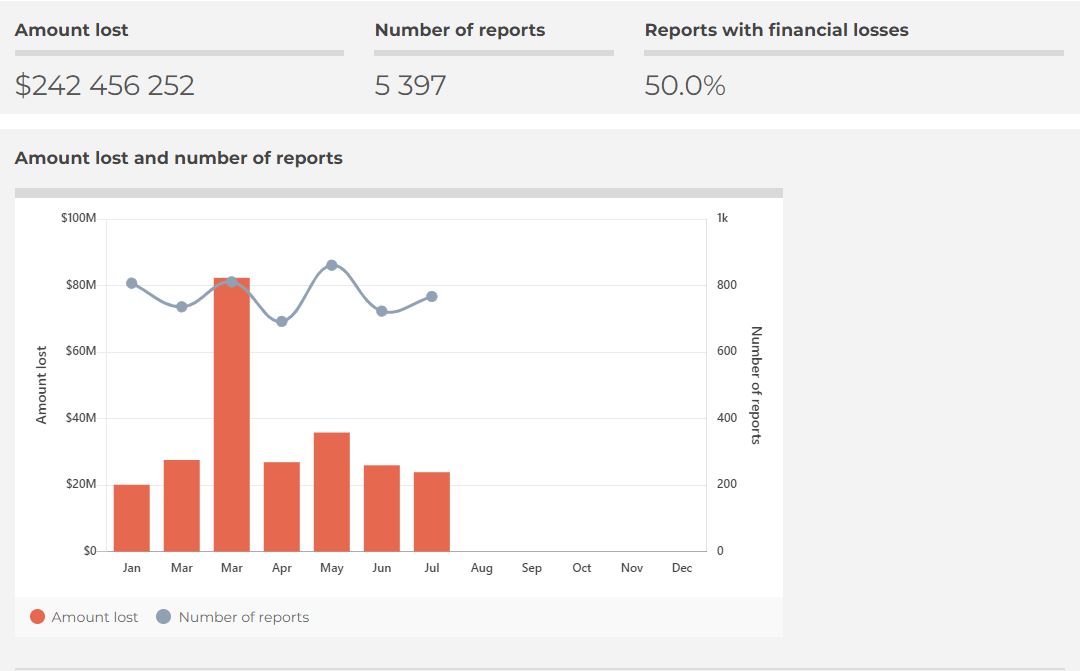 Australians have continued getting duped by investment and crypto-related scams, losing 242.5 million Australian dollars to scammers so far in 2022, according to Scamwatch’s latest data.

From January to July of this year, the majority of all funds lost to scams of all types were investment scams, which range from romance baiting scams to classic Ponzi schemes and cryptocurrency scams.

The figure is already 36% higher than the figures across all of 2021, which revealed that Australians lost 178.2 million Australian dollars to investment scams in the year.

It’s a threat that has prompted consumer advocates to push for banks to shoulder more responsibility for reimbursing scams to “drive greater investment in stopping fraud.”

According to a Thursday report from the Australian Broadcasting Corporation (ABC), advocacy groups are pushing for reforms requiring banks to check the recipient’s name matches the account name when money is transferred online.

“The key reform is to shift that liability from individual consumers to banks when it comes to scam losses,” Consumer Action Law Centre CEO Gerard Brody said:

“They [banks] ask you for the account name, but they don’t actually check.”

However, banks want more customers to take up the optional PayID technology, which allows customers to see the name attached to a BSB and account number.

Brody said it was clear the optional system forcing consumers to be solely responsible for preventing scams isn’t working.

Australian authorities appeared to have stepped up scrutiny over the crypto space amid a rise in crypto scams, hacks and the general market downturn.

“We want to be very clear and unambiguous in our messages to consumers entering the market,” ASIC commissioner Sean Hughes told a Governance Institute conference, as reported by local media, adding:

“We think that crypto assets are highly volatile, inherently risky and complex.”

In August, the Australian Federal Police set up a dedicated team to monitor crypto-related transactions after previously calling cryptocurrency an “emerging threat” amid a rise in criminal activity surrounding the technology.

The month also saw the new…