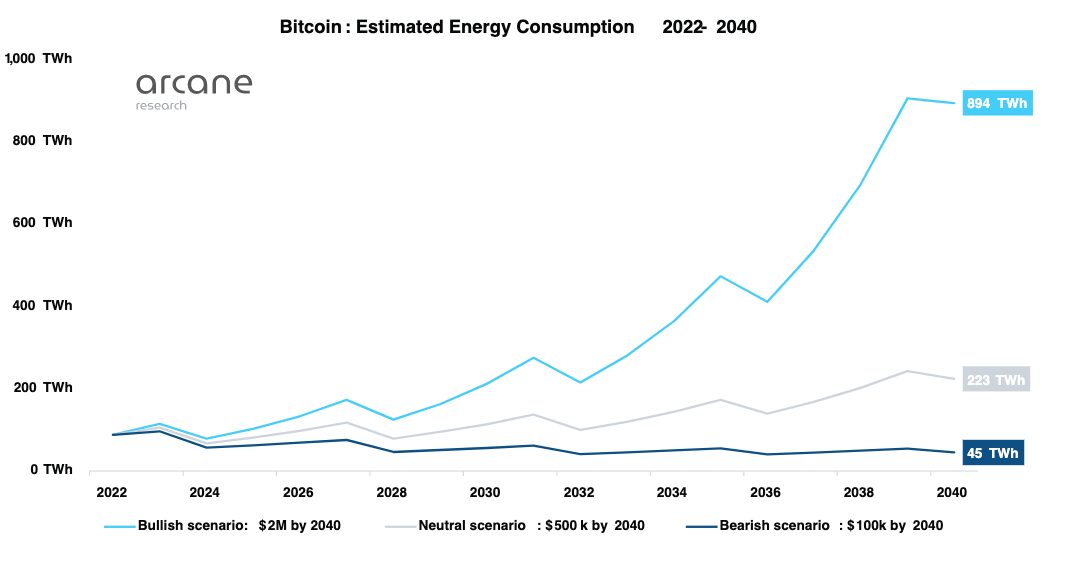 Bitcoin (BTC), the world’s most-valued cryptocurrency, has the potential to be a significant energy consumer in the future, but only if it reaches several million dollars, according to new estimates by Arcane Research.

Crypto research and analytics firm Arcane Research on Monday released a report estimating the development in Bitcoin’s energy usage towards 2040.

Authored by Arcane Research analyst Jaran Mellerud, the report points out that Bitcoin’s future energy consumption differs massively depending on the future Bitcoin price alongside factors like transaction fees, electricity prices and others.

If the BTC price hits $2 million in 17 years, Bitcoin may consume 894 Terawatt-hours (TWh) per year, surging 10 times from today’s level, the report suggests. Despite huge growth, such energy consumption would only account for 0.36% of the estimated global energy consumption in 2040, increasing from Bitcoin’s 0.05% share today, the analyst estimated.

“Currently, based on their energy consumption of 88 TWh and an average energy price of $50 per MWh, Bitcoin miners spend around 50% of their income on energy,” Mellerud noted.

Bitcoin’s future energy consumption would be much lower in less bullish scenarios. BTC price would need to reach $500,000 by 2040 for Bitcoin to consume 223 TWh per year. If Bitcoin trades at $100,000 in 17 years, BTC mining would consume just 45 TWh per year, the report notes.

The analyst went on to mention the significant impact of the Bitcoin halving, a quadrennial event implying a 50% reduction in miners’ block reward. According to the report, BTC price must be rising at a tremendous pace due to the halving, while halving’s “mitigating effect” can be offset by growing transaction fees in the future. “Such an increase will only happen if there is a significant demand for using Bitcoin as a payment system,” Mellerud wrote, adding:

“The Bitcoin price depends on the market demand for Bitcoin as a store of value, while the transaction fees are driven by the usage of Bitcoin as a medium of exchange.”

As a store of value and a medium of exchange make up two of the most important functions of money, the report also suggests that Bitcoin’s energy consumption will only reach a significant level if Bitcoin succeeds as money.

As many BTC skeptics believe that such a scenario…