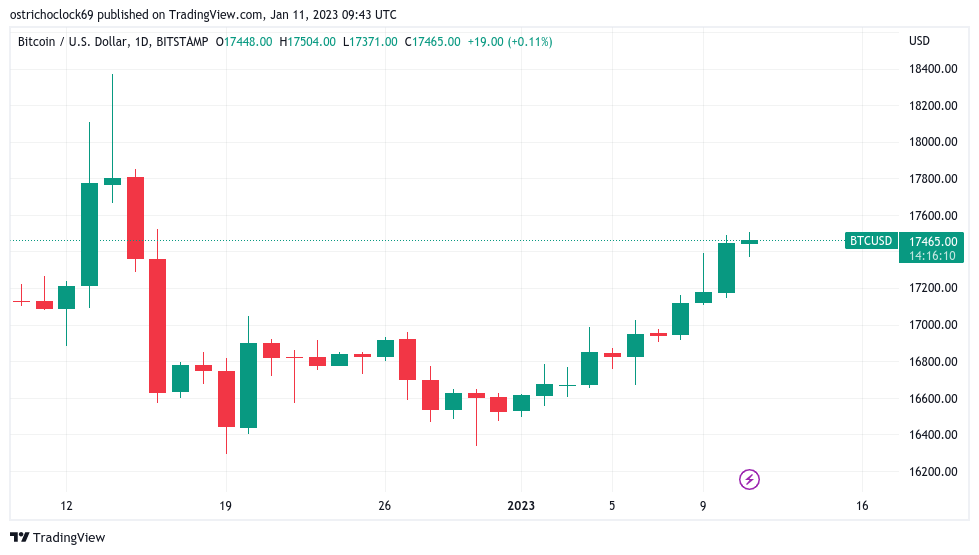 Bitcoin (BTC) staged a brief but promising return to $17,500 overnight on Jan. 11 as newfound strength lingered.

Almost tying with the peak from Dec. 16, the pair displayed rare upside momentum against a backdrop of some of the lowest volatility ever seen over the holiday season.

Now, traders and analysts anticipate an erratic reaction to upcoming macroeconomic data from the United States. Due Jan. 12, the Consumer Price Index (CPI) print is expected to bolster the narrative that inflation is waning, offering a potential window of opportunity for risk assets.

Comments from Jerome Powell, Chair of the Federal Reserve, had disappointed markets the day prior, avoiding mention of future policy or the state of the economy itself.

“The real break out or dump will come on Thursday when CPI data is released,” popular trader Johnny summarized on Twitter.

A subsequent post cautioned on “bull tweeting as $BTC sits under higher time frame resistance at $17,600,” with Johnny previously urging followers not to “feel the urge to FOMO especially this week.”

“CPI this week could whip saw the prices back to the where they were last week,” he argued.

The conservative approach appeared symptomatic of the broader sense of apathy among market participants on the day, with little belief that Bitcoin could put in a sustained rally.

The past weeks have seen continued macro low predictions from some of the best-known traders, these focusing variously on $12,000, $10,000 or even lower.

“Are we heading into ‘disbelief’?” Philip Swift, co-founder of trading platform Decentrader, queried.

A firmly bearish take stayed firmly in place when it came to Il Capo of Crypto, who ignored the recent recovery across crypto to insist that there was “not a single bullish confirmation yet.”

“Just look. It’s there, right before your eyes. Bearish trend is intact,” he commented alongside the 3-day BTC/USD chart.

“Bitcoin and most of the market are testing broken supports as resistances. We have seen this over and over.”

Equally doubtful was the prognosis for altcoins, with Ether (ETH)…