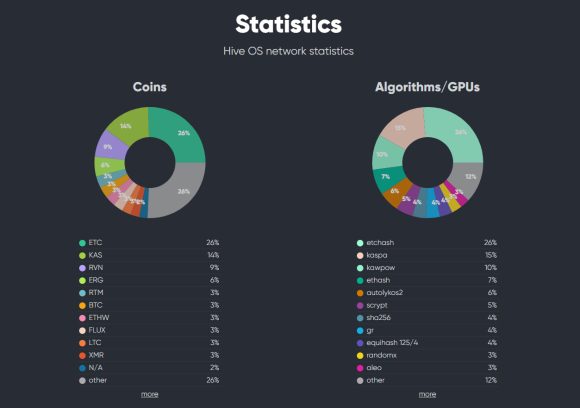 According to the mining statistics provided by Hive OS network based on the users of their platform Kaspa (KAS) is the second most popular coin mined with already more than 50% of the Ethereum Classic (ETC) miners and the third spot is for RavenCoin (RVN) with around 30% of the miners of ETC. The comparison here is a bit unfair as there are ASIC miners available, though most Ethash/ETChash ASICs are not supported by HiveOS, so the stats is based mostly on GPU miners. Although ETC is still with very strong position for GPU miners partly thanks to the dual mining with Zilliqa (ZIL), its position for the top mineable GPU crypto coin is slowly been overtaken by other coins such the newcomer KAS or the more established RVN. Kaspa (KAS) can also be dual-mined with ZIL already for some additional extra profit and it will probably not be long until we see other coins such as RVN also getting dual-mining with ZIL as well.

The mining statistics also reveals some other interesting things such as Radeon RX 570 and RX 580 being the most popular AMD mining GPUs and GeForce RTX 3070 and GTX 1660 Super being the most popular Nvidia GPUs. As far as ASIC miners are considered, we see the top taken by the Antminer L3+ Scrypt miner as it is more profitable than the still very popular Antminer S9 SHA256 ASIC miner for Bitcoin. Though you should note that both top positions are with the Hiveon firmware installed that brings a lot of extra options for tweaking the miners for much better efficiency compared to the stock settings. Not to mention that the L3+ and the S9 are lately getting used a lot in DIY projects for home heaters that also mine crypto to pay for some of the electricity bills.

As far as the most popular mining software used on the platform, it seems that the leader is currently lolMiner, probably because it is the best performing and feature rich KAS miner out there at the moment, followed by Teamredminer and Nbminer on third place. Most Kaspa (KAS) miners are currently sticking to lolMiner, though GMiner is getting there performance wise and lately kind of leading feature wise with the addition of dual-mining KAS with ZIL. ETC miners still use a variety of miners that are based more on personal preference as there are a lot of options for mining ETC with very similar performance and the same goes for RVN as well.