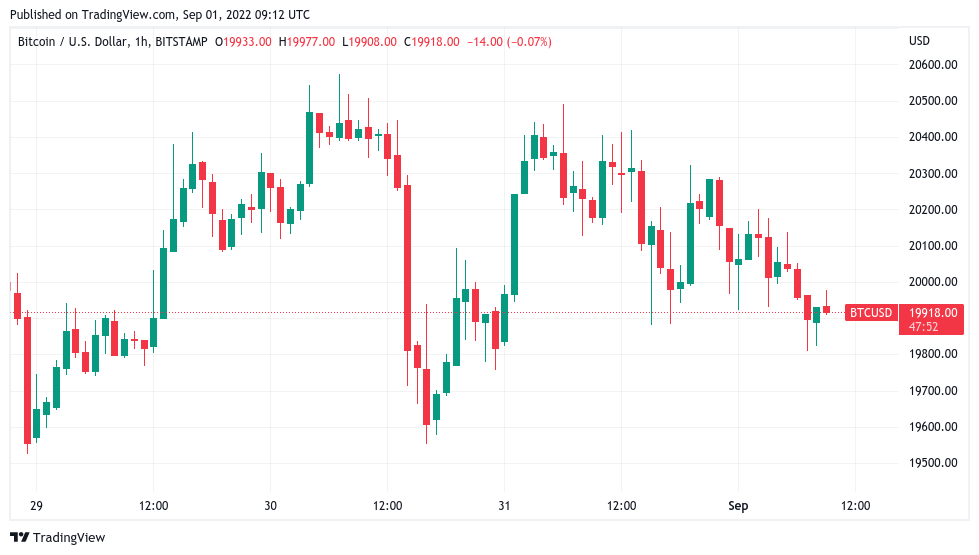 Bitcoin (BTC) has sealed its worst August performance since 2015 after the monthly candle closed down 13.9%.

Data from Cointelegraph Markets Pro and TradingView confirms that BTC/USD finished the month at $19,990.

A knock to bulls’ efforts to stabilize spot price, the August close was only the second monthly candle finish below the $20,000 mark (depending on the exchange used) since late 2020.

While preserving June’s close as the macro low on the monthly chart, the performance led traders into firmly bearish territory. Among them was Crypto Tony, who warned that the stage was set for deeper losses going forward.

His outlook, he told Twitter followers on the day, saw him “leaning towards a macro drop down.”

– A change in market behaviour and becoming macro bullish (Taking out $30,000 and putting in a higher high)

I am leaning towards a macro drop down, which i where i will be looking to ladder into #Altcoins for swings https://t.co/qz7RAgw4gH

Caleb Franzen, senior market analyst at Cubic Analytics, added that the first weekly candle of September is already shaping up to take Bitcoin further into the red.

“The weekly candle for Bitcoin doesn’t look good, though it’s still very early in the week,” he warned alongside an explanatory chart.

“The long top wick and selloff is objectively a bad sign, if it closes this way. Particularly if it turns into a red candle. Something to watch for the rest of the week.”

Others saw more optimistic implications in the monthly close.

On the basis of this indicator, a further correction was also predicted [at a time when uber-bullishness dominated on CT].https://t.co/Y6ONHetp80

Fellow trader Johal Miles reiterated the potentially bullish knock-on effect of an MACD cross from mid-August, one which nonetheless had seen “no continuation yet.”

One on-chain indicator in particular meanwhile reinforced the…