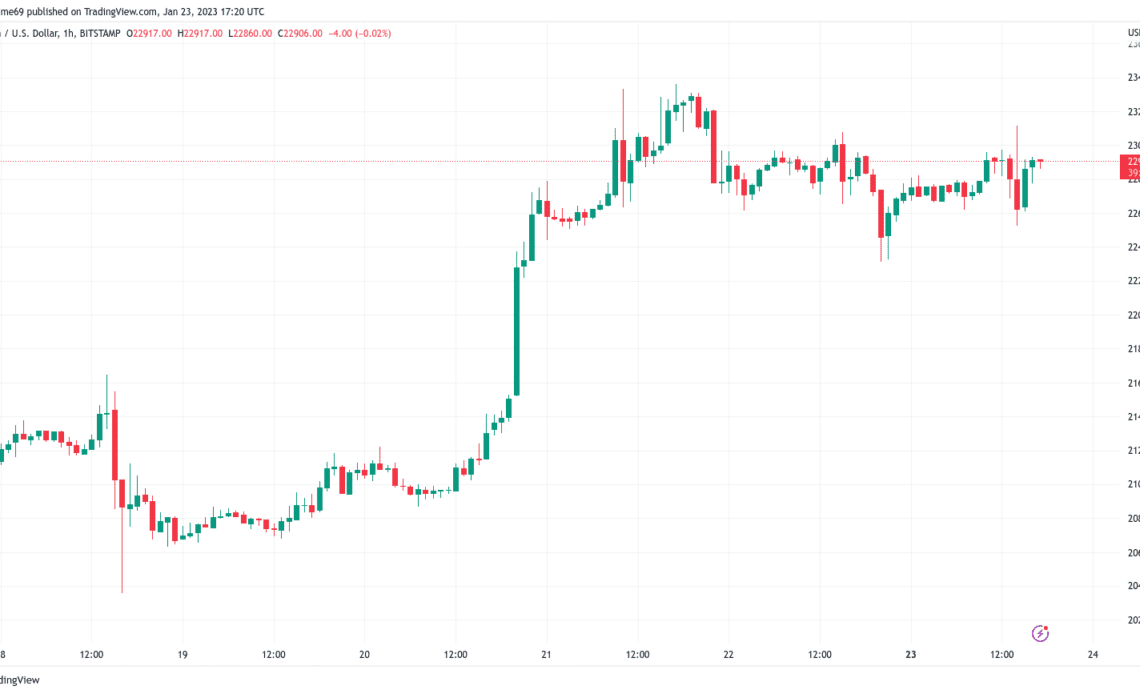 Data from Cointelegraph Markets Pro and TradingView showed BTC/USD continuing to circle $22,800 at the time of writing.

The pair had managed to conserve its trading range over the weekend, with a local low of $22,315 allowing bulls to avoid a major setback.

The mood remained buoyant among risk assets on the day, with the S&P 500 up 1.3% and Nasdaq Composite Index trading 2% higher.

Gold, too, disappointed those hoping that a retracement would set in after weeks of impressive returns, something analyst Alisdair McLeod put down to classic principles of supply and demand.

“Attempts to knock back gold continue to fail,” he commented on the daily XAU/USD chart.

“While technical analysts point out a correction is due, they seem to be unaware that central banks are buying every ounce they can get their hands on.”

With that, an already flagging U.S. dollar index (DXY) managed only a modest rebound at the open before returning to trend downward, circling 102 at the time of writing.

Among Bitcoin analysts, the jury remained out as to whether the current rally really did mark a trend change after more than a year of bear market.

“There are signs this could be the start of the bull, and there are also signs it’s a bear market rally. Until I see confirmations, I’m focused on the data that matters so I’ll know whether a potential breakout is a justifiable move or a higher probability of being a fakeout,” Keith Alan, co-founder of on-chain data resource Material Indicators, summarized.

Alan continued noting that one macro trigger in particular still needed to enter to call time on bears.

“According to the economic data we’ve seen so far, the uptrend in unemployment, which has historically marked bottoms, is still missing,” he wrote.

“Sure, maybe ‘this time is different’, but I’m looking for full candles above the 200 Week MA to consider it a confirmed breakout.”

Alan was referencing Bitcoin’s 200-week moving average, a key trend line which Bitcoin has yet to reclaim after losing it as support late last year.