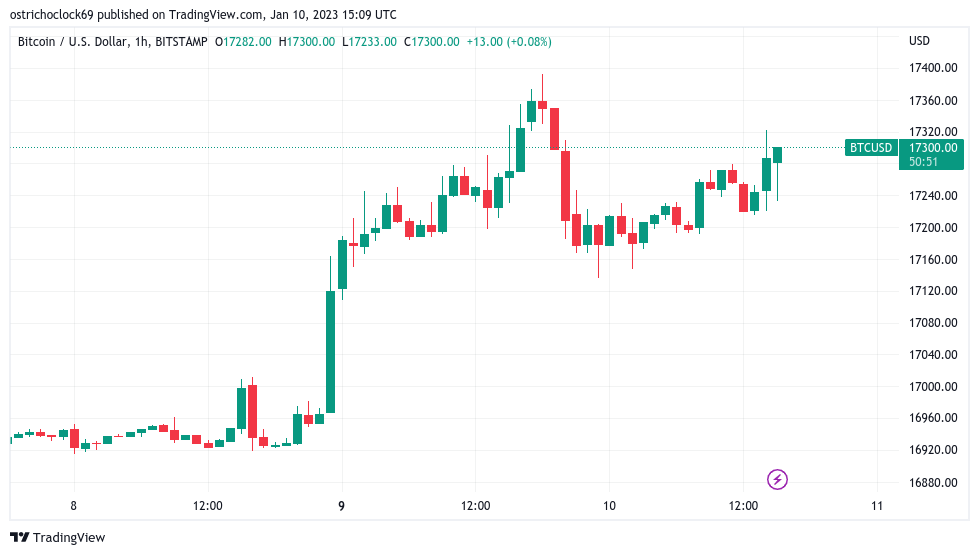 Data from Cointelegraph Markets Pro and TradingView followed BTC/USD as it stayed flat at around $17,250 on Bitstamp.

Hopes had focused on a fresh BTC price catalyst courtesy of the Fed in the form of a speech by Chair Jerome Powell.

Speaking at the International Symposium on Central Bank Independence at Sweden’s Central Bank headquarters in Stockholm, however, Powell avoided the topic of U.S. monetary policy altogether.

“I will address three main points. First, the Federal Reserve’s monetary policy independence is an important and broadly supported institutional arrangement that has served the American public well,” he began.

“Second, the Fed must continuously earn that independence by using our tools to achieve our assigned goals of maximum employment and price stability, and by providing transparency to facilitate understanding and effective oversight by the public and their elected representatives in Congress. Third, we should ‘stick to our knitting’ and not wander off to pursue perceived social benefits that are not tightly linked to our statutory goals and authorities.”

The latter point referred to the Fed implicating itself in the climate change debate.

In the absence of market triggers, neither crypto nor U.S. stocks were especially promising in the first hour’s trading on Wall Street.

In fresh analysis on the day, Filbfilb, co-founder of trading suite Decentrader, outlined potential upside and downside targets for BTC price action in the short term.

Volatility, as Cointelegraph reported, was still expected on Jan. 12 with the release of Consumer Price Index (CPI) data for December.

“Buyers have been found for 2 months below 16.5k,” he told Telegram channel subscribers, highlighting several weekly moving averages (WMAs) to bear in mind.

“20 WMA sits around 18.3k which is also the current range high, previous support, and diag resistance. If it breaks that key level, the top of the wedge would be the target, also the 200 WMA c.$24k.”

Should bearish tendencies return, meanwhile, a trip to as low as $14,000 remained possible.

“Liquidity shows that it might be a bit of a battle to make it up to 24k,” Filbfilb continued.

“If there is a curveball thrown into the mix, there is fuel in the tank to…