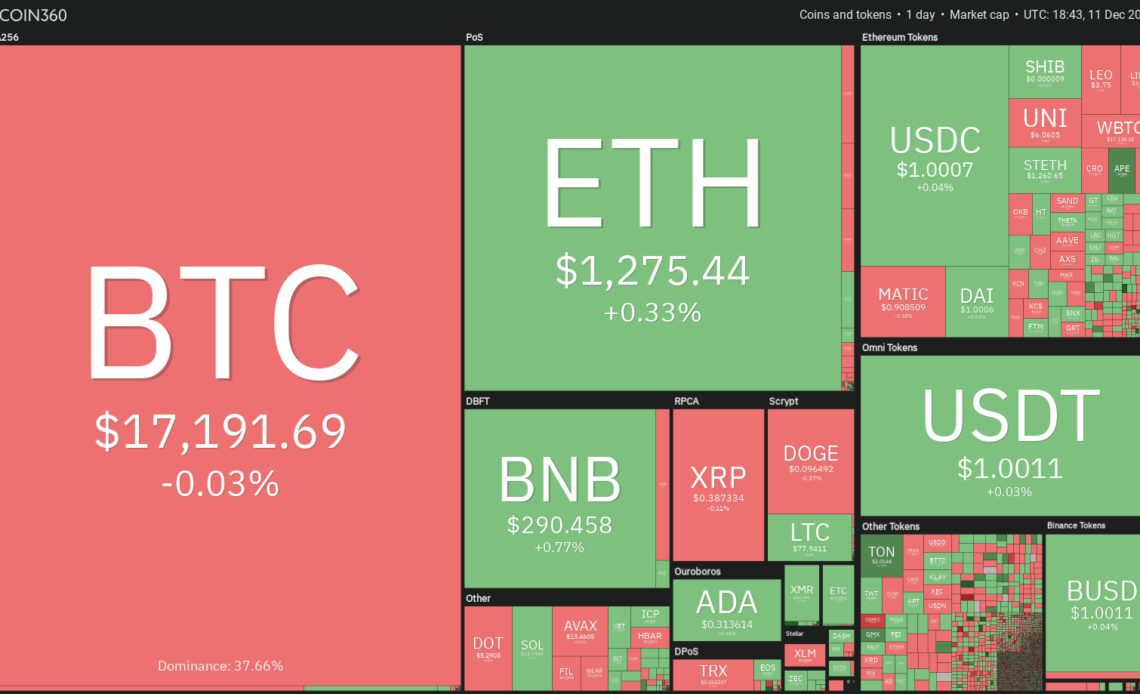 The relief rally in the United States equities markets took a breather this week as all major averages closed in the red. Traders seem to have booked profits before the busy economic calendar next week.

The S&P 500 index dropped 3.37%, but a minor positive for the cryptocurrency markets is that Bitcoin (BTC) has not followed the equities markets lower. This suggests that crypto traders are not panicking and dumping their positions with every downtick in equities.

The range-bound action in Bitcoin suggests that traders are avoiding large bets before the Federal Reserve’s rate hike decision on Dec. 14. However, that has not stopped the action in select altcoins, which are showing promise in the near term.

Let’s look at the charts of Bitcoin and select altcoins and spot the critical levels to watch out for in the short term.

Bitcoin has been hovering around its 20-day exponential moving average (EMA) of $17,031 for the past few days. The flat 20-day EMA and the relative strength index (RSI) near 50 do not give a clear advantage either to the bulls or the bears.

The critical level to watch on the upside is $17,622. If buyers kick the price above this level, the BTC/USDT pair could start a stronger recovery that could carry it to the downtrend line. The bears are expected to defend this level aggressively.

If the price reverses direction from the downtrend line but does not fall below $17,622, it will suggest that the bulls are attempting to flip the level into support. That could enhance the prospects of a break above the downtrend line. The pair could then rally to $21,500.

The pair has been trading inside an ascending channel on the four-hour chart. The bears have kept the price in the lower half of the channel, indicating selling on rallies. A break below the moving averages could pull the price to the support line of the channel. If this level fails to hold, the pair could start a down move to $16,678 in the near term.

If the price turns up from the current level or the support line of the channel, it will indicate that bulls continue to buy on dips. The pair could then attempt a rally to the overhead resistance at $17,622. If this level gets taken out, the pair could climb to the resistance line of the…