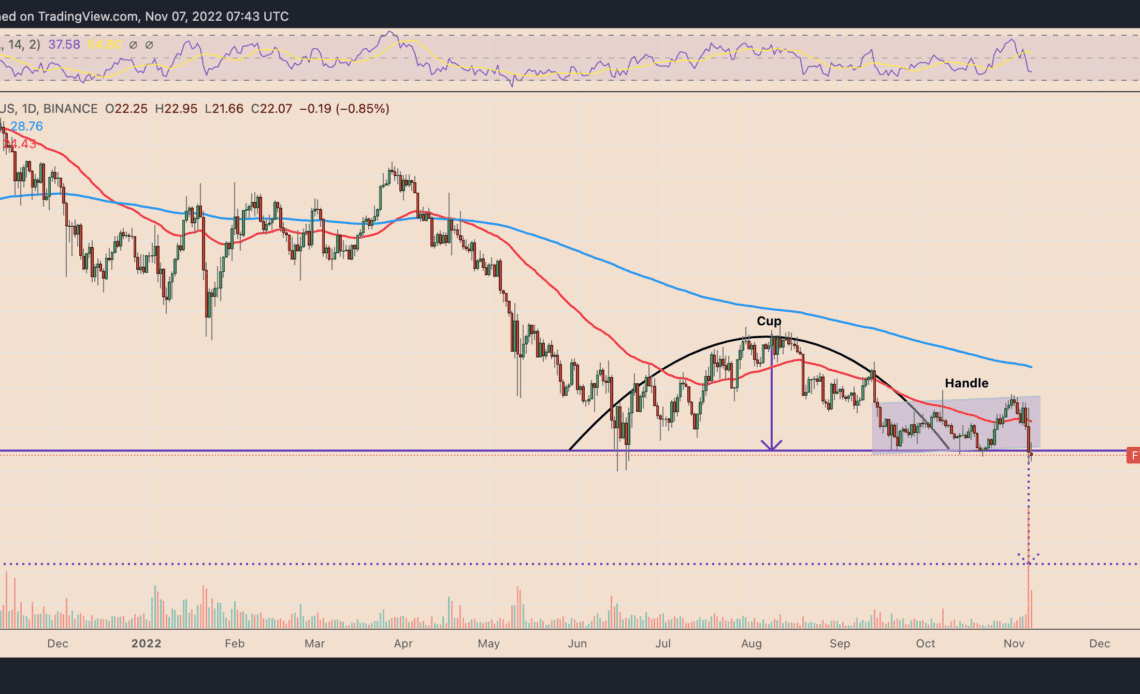 An ongoing selloff in the FTX Token (FTT) market could worsen in the coming months owing to a mix of pessimistic technical and fundamental indicators.

From a technical perspective, FTT has formed an inverse-cup-and-handle pattern on the daily chart, identifiable by its crescent-shaped price trend followed by a less extreme upward retracement.

On Nov. 6, FTT broke below the pattern’s support line near $22.50, accompanied by a volume spike. The FTX exchange token’s selloff continued on Nov. 7 below the support line, raising risks of a bearish continuation phase in the coming months.

As a rule of technical analysis, the inverse-cup-and-handle breakdown can push the price down by the length equal to the distance between the pattern’s support and peak level. That puts FTT’s breakdown price target at around $16, down roughly 30% from the current price.

The bearish technical setup came as Changpeng Zhao (CZ), the CEO of crypto exchange Binance, said his company would liquidate its entire FTT holdings in the coming months, on fears that the token might collapse in the same manner as Terra (LUNA) in May 2021.

Binance was an early investor in FTX.

Liquidating our FTT is just post-exit risk management, learning from LUNA. We gave support before, but we won’t pretend to make love after divorce. We are not against anyone. But we won’t support people who lobby against other industry players behind their backs. Onwards.

Raising selloff risks, the announcement followed a large transfer of roughly 23 million FTT tokens worth $530 million to Binance, which CZ confirmed was a “part” earmarked for liquidation.

Yes, this is part of it. https://t.co/TnMSqRTutr

This also coincided with a spike in individual transactions worth more than $100,000.

Notably, Alameda Research had $14.6 billion on its balance sheet as of June 30, with FTT being the largest holding at $5.8 billion, making up 88% of its net equity. In addition, the firm held $1.2 billion in Solana (