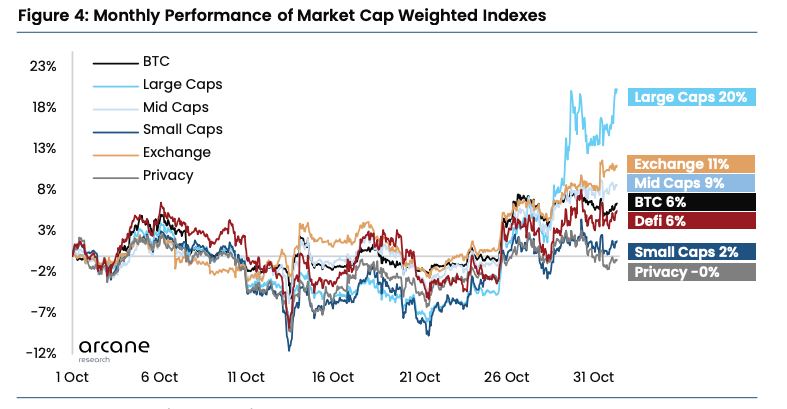 As November begins, analysts are busy dissecting the major market movements that occurred in October. While Bitcoin (BTC) stayed relatively unchanged with only 5.89% growth in October, Arcane Research senior analyst, Vetle Lunde mapped out the direction the market might take in the next few months.

“Uptober,” a reference to Bitcoin’s bullish historical performance in the month of October, was a common theme across many threads on crypto Twitter and according to Lunde it appears to have happened. Data shows BTC and exchange tokens outperformed the large caps index up until Oct. 26.

October’s Bitcoin spot market was driven by increased volume and lower volatility, while benefiting from a short squeeze that briefly invigorated the market. According to Lunde, the last week of October saw the largest short liquidation volume in crypto since July 26, 2021.

While this activity helped push Bitcoin up by 6%, Ether (ETH) and Binance Coin (BNB) saw more substantial gains at 18% and 19% respectively.

The short squeeze helped give an overall boost but Lunde concluded that the momentum did not create a substantial change in BTC price. BTC spot volume is up 46% in the last seven days and the 30-day volatility index is at a 2-year low. Furthermore, the 7-day volatility index is sitting at 2.2%, whereas the yearly average is 3%.

While Bitcoin is priced attractively, the best approach to this market is to dollar cost average in the short-term rather than using leverage, according to Lunde. Bitcoin has been experiencing uniquely low volatility and follows the US equities market closely so it is important to track Q3 earnings reports.