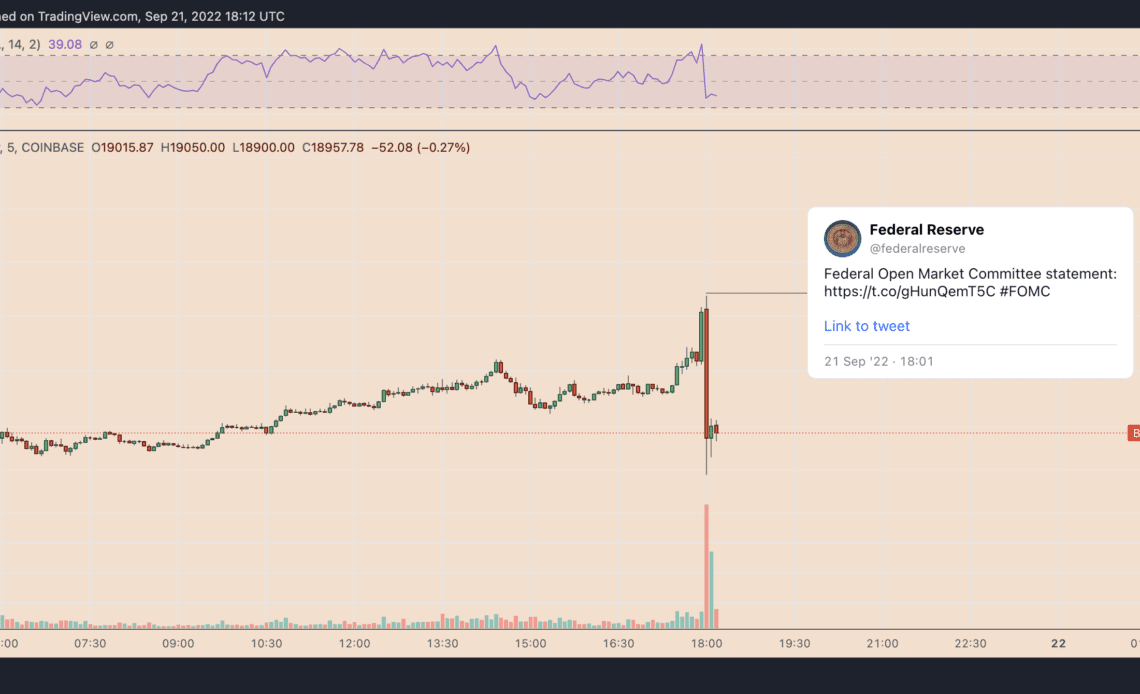 BTC’s price dropped circa 6.5% from its intraday high of $19,950, hitting $18,660 minutes after the Federal Open Market Committee’s statement. Its decline mirrored a similar sudden correction in the U.S. stock market, with the benchmark S&P 500 dropping 0.5% minutes after the Fed update.

On the other hand, the 10-year U.S. Treasury note yield surged to 3.6% after the Fed’s announcement versus 3.56% five minutes before it. Similarly, the yield on the 2-year Treasury note climbed from 3.98% to 4% in the same timeframe.

The U.S. dollar index (DXY), which measures the greenback’s strength against a basket of top foreign currencies, surged to 111.57 for the first time in 20 years.

The Fed also published an updated “dot plot” which complied its officials’ individual interest rate projections by the end of 2025. These forecasts signaled additional rate hikes in the future, with the 2022 target sitting at 4.4% and 2023 targeting 4.6%.

All the metrics point to more pain for Bitcoin

The dollar’s rise and Bitcoin’s fall after the Fed update reflected investors’ growing appetite for cash and cash-based instruments compared to riskier assets. Meanwhile, the central bank’s dot plot hinted that investor sentiment would remain unchanged until the end of 2023.

Bitcoin price could continue to suffer due to the Fed’s hawkish stance and its attempts to bring inflation down from its current 8.3% level. After the central bank update, many analysts noted that BTC’s price could break below its current technical support range of $18,000-20,000, given that the Fed could raise rates by another 75 bps before the close of the year.

I really don’t know how much longer this $BTC support can hold pic.twitter.com/YAdkkB9Zww

Bitcoin’s technical outlook appeared similarly bearish. Notably, the cryptocurrency has been forming a bearish reversal pattern dubbed the “head-and-shoulders,” whose profit target sits around $14,000, as illustrated below.