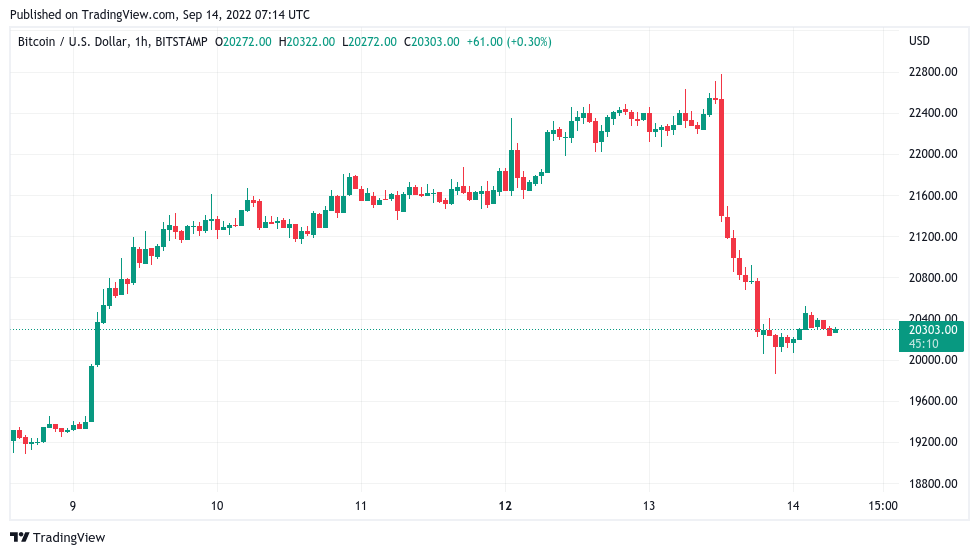 Markets lose big in bid to “fight the Fed”

Data from Cointelegraph Markets Pro and TradingView followed BTC/USD as it hit lows of $19,870 on Bitstamp — its worst since Sep. 9.

The move came amid a stocks rout triggered by Consumer Price Index (CPI) inflation data for August coming in above expectations.

Despite still being lower than July, the market had hoped for a quicker cooling of inflation more broadly and hence the chance of a quicker loosening of policy by the Federal Reserve.

“Markets had tried desperately to spin a bull case and fight the Fed, basically, and that’s a dangerous place to be,” Carol Schleif, deputy chief investment officer at BMO Family Office, told Bloomberg.

In total, U.S. stocks fell by approximately $1.6 trillion on the day — more than four times the Bitcoin market cap.

At the time of writing, the index circled just under 110, less than 0.9% below that macro peak seen earlier in the month.

At the time of writing, cross-market crypto liquidations totaled $355 million, with Sep. 13 forming one of the largest long liquidation events in recent weeks.

The sell-off thus left BTC/USD up just 1% for the month of September, which was nonetheless still the first “green” September since 2016, Coinglass showed.