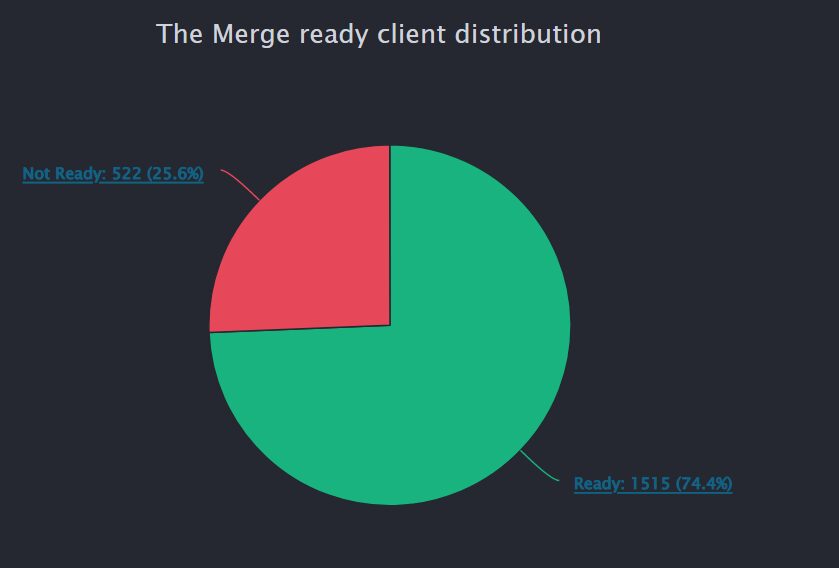 The Bellatrix upgrade preparing Ethereum for the Merge was successfully completed on Sept. 6 – however concerns were raised over an almost one in ten missed block rate across the last 600 slots.

The Bellatrix upgrade updated Ethereum consensus layer clients at epoch 144896 on the Beacon Chain prior to the upcoming Merge scheduled for sometime next week .

However, 5% of the validators dropped offline during the hard fork, which contributed to the 9% missed block rate, according to Gnosis co-founder Martin Köppelmann. This led some observers to question the network’s readiness for the big switch to proof of stake.

Missed block rate in the last 600 slots: >9%
Historically this rate has been around ~0.5%. It shows that Bellatrix caused some issues for some validators. Nothing dramatic but still a number to keep an eye on.

Köppelmann added that the 9% figure was 1700% higher than the historical missed block rate of 0.5%. The issue may be related to the 25.6% of clients that Ethernodes cites at “not ready” for The Merge.

Partner of Cinneamhain Ventures Adam Cochran said he hoped the “big spike” in missed blocks would get debugged before the Merge proper, adding that “we really don’t want to be seeing unexpected issues at this late stage.”

But not everyone is concerned. Anthony Sassano, founder of the Daily Gwei said that having only 5% of validators falling off the network was actually an “an amazing result” and confidently stated “there’s not actually much that can go catastrophically wrong.” with the Merge.

“I would say that the ‘worst case scenario’ would be if the chain just halts because the switchover from PoW to PoS didn’t work at all – this would then require some sort of coordinated human intervention to fix.”

“Though if we see things like validators dropping off the network due to configuration issues, missed blocks/slots or some clients having major bugs, these things wouldn’t be cause for major concern as they are relatively easy to recover from,” he added.

So to recap, post-Bellatrix, a few stats:
– network participation rate is 94.94%
– number of active validators is 403766
– number of offline validators 17743
– and client diversity for consensus layer clients page will be updated tomorrow so we can check again then