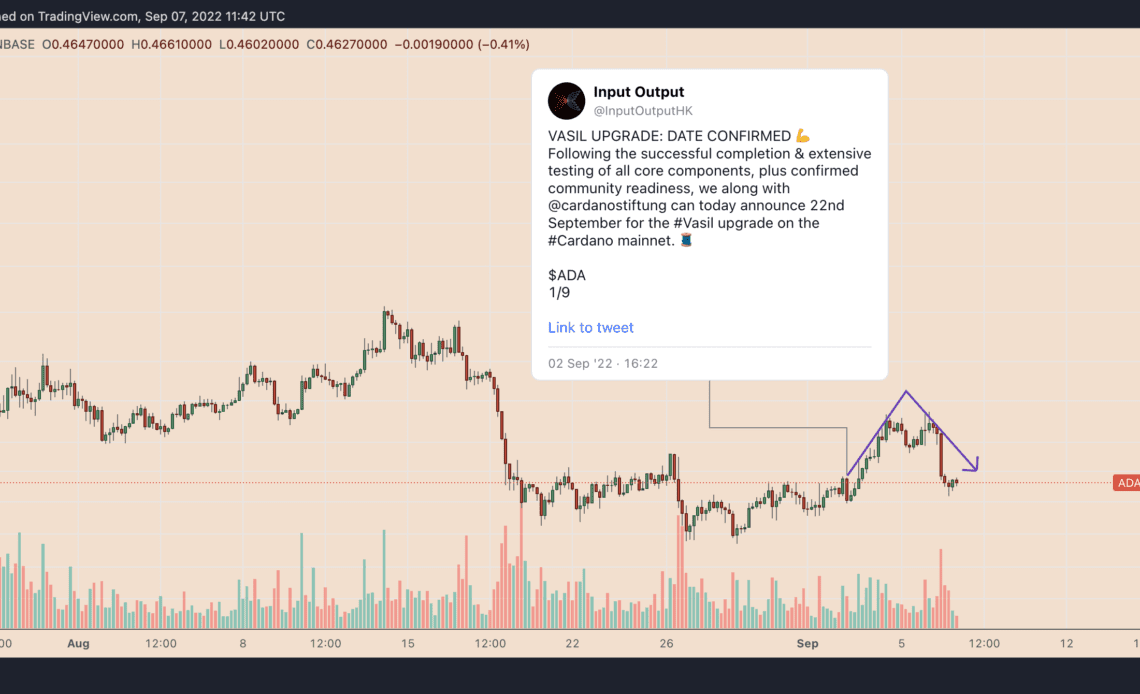 In detail, ADA’s price has risen approximately 3.5% to $0.51 since the Vasil launch announcement, including a circa 14% rally followed by its near-perfect wipeout. In other words, traders initially bought the Vasil hype but were quick to exit markets, as illustrated by the price action below.

Cardano Founder Charles Hoskinson blamed “macro factors” for ADA’s underperformance despite the Vasil euphoria, noting that the crypto markets, on the whole, are “disconnected from reality.” He added:

“Cardano has never been stronger and frankly many other projects are also solid across the industry, yet you don’t see that reflected — just a sea of red.”

The statements appeared as riskier assets prepared for another deep plunge in the days leading up to the Federal Open Market Committee‘s (FOMC) meeting on Sept. 20 through Sept. 21.

Markets believe that the Federal Reserve officials will vote to increase benchmark interest rates by another 0.75% on Sept. 21. Overall, the U.S. central bank is looking to raise the rate to 3.75% to 4% by the end of 2022.

A high-rate environment could hurt Cardano and other top-cap crypto assets, given it will likely increase the appeal of cash-based instruments among investors.

Is a “mini” Cardano rally ahead?

From a technical perspective, Cardano looks ready to undergo a mini rally in the days leading up to the Vasil hard fork.

On the four-hour chart, ADA’s price tests a support confluence for a potential rebound move. This confluence is made up of a multi-week ascending trendline and a support bar highlighted in the chart below.

Suppose ADA rebounds from the confluence. Then, the ADA’s immediate upside target is around $0.50. This level is a meeting point of two resistance levels: a “multi-week descending trendline” and a “mid-level target” that has served as a price ceiling since mid-August.

Meanwhile, a break above $0.50 could have ADA bulls test $0.53 as their primary upside target, a level with a significant history as resistance. In other words, ADA could print a 15% gain ahead of the Vasil hard fork when compared to its today’s…