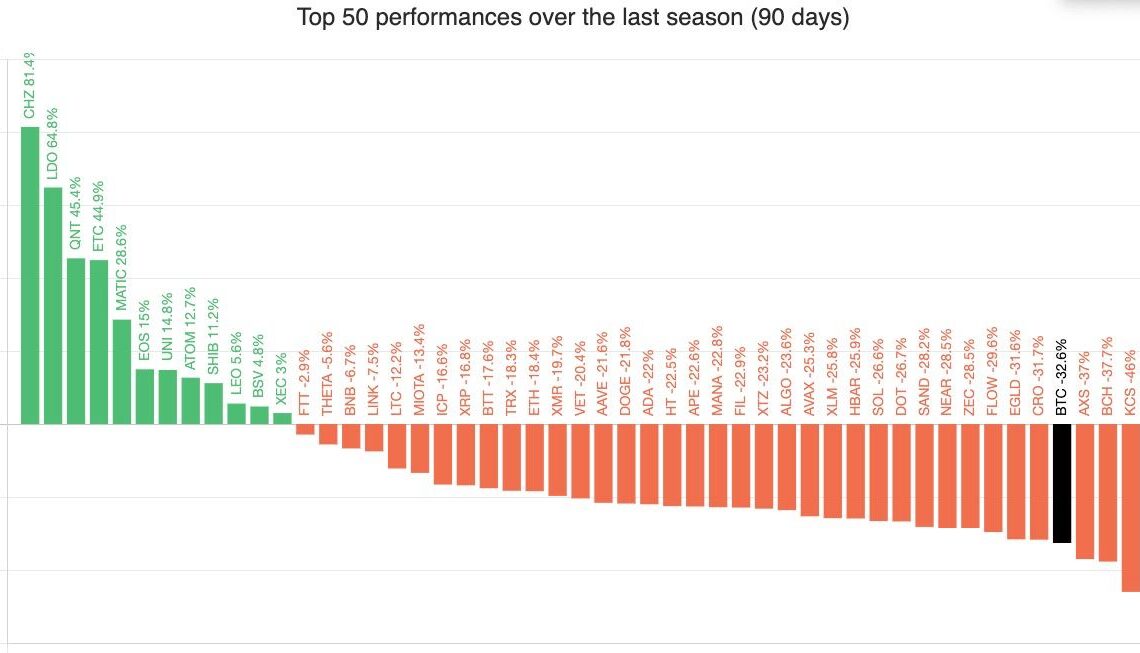 The cryptocurrency market overall endured a bad summer on back-to-back pieces of bad news, ranging from Terra’s collapse to the Celsius Network’s liquidity crisis. But some tokens have bucked the downtrend and have actually seen their valuations go up over the summer.

Specifically, the last 90 days have seen these so-called alternative cryptocurrencies, or “altcoins,” outperforming top coins like Bitcoin (BTC) and Ether (ETH). Here are three among them

Chiliz’s (CHZ) return in the last 90 days comes to be above 80%, the highest among the top-cap cryptocurrencies. Moreover, CHZ is down only 26% year-to-date compared with BTC and ETH losing 57% and 60%, respectively.

On the daily chart, CHZ’s price reached $0.20 per piece on Aug. 29, and was looking to close the month in profit. Conversely, from a technical perspective, the Chiliz token stares at a potential 55% correction to $0.09 in September, based on the setup shown below.

Originally, the CHZ price rally started amid a rebound witnessed across the crypto market. But Its upside move picked momentum on a flurry of optimistic updates, including a partnership with crypto exchange Huobi Global and a nearly 25% acquisition of FC Barcelona’s Barça Studios.

FC Barcelona announces the sale of 24.5% of Barça Studios to the company https://t.co/SkC8g62KY4 for 100 million euros to accelerate the club’s audiovisual, blockchain, NFT and Web.3 strategy.

Chiliz also benefited from the hype around its back-to-back network updates as it attempts to do away with Ethereum and launch its own chain CHZ 2.0.

Lido DAO (LDO) has rallied around 60% in the last 90 days primarily due to the euphoria around “the Merge,” Ethereum’s long-awaited network transition from proof-of-work to proof-of-stake in September.

Lido DAO helps underfunded users to become stakers on Ethereum’s upcoming proof-of-stake chain. It does so by collecting users’ Ether funds into a pool of 32 ETH—as required by the Ethereum network—and depositing them into the Merge’s official smart contract.

The prospects of Lido DAO attracting more users in the…