Nearly half of US adults say their crypto punts are worse than expected: Survey 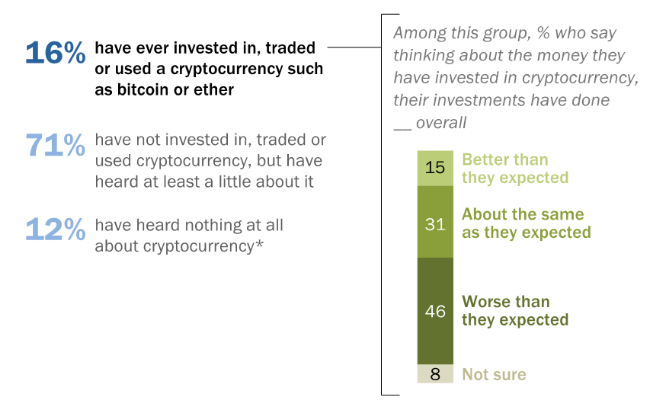 Amid the ongoing crypto winter, new data from a Pew Research Centre survey has shown that 46% of adult crypto users in the United States are seeing lower than expected returns on their crypto investments.

The survey gathered responses from over 6,000 randomly-selected adults across the United States, with panelists participating in self-administered web surveys.

Conducted from July 5 to 22 of this year, the majority of respondents who said they had invested in crypto said they saw lower than expected returns than expected while only 15% of people surveyed said their crypto investments had done better than expected. Meanwhile, around 31% said it was “about the same as they expected.”

It’s unfortunate, given the vast majority of crypto user respondents said they became interested in cryptocurrency because they were looking for a “different way to invest,” and thought it was a “good way to make money.”

Women made up over half of the respondents and people over 50 years old represented the largest sample size. Overall, only 16% of total respondents said they had invested, traded, or used a cryptocurrency at some point in their lives.

U.S. investors piled into crypto in its heyday

The high proportion of disappointed crypto investors could be attributed to a sharp rise of crypto adopters in the country in 2021 when the market was at its all-time high.

Cointelegraph previously reported that roughly 70% of crypto hodlers in the U.S. started investing in cryptocurrencies such as Bitcoin (BTC) in 2021, the year that saw BTC reach an all-time high (ATH) of roughly $67,582 on November 8, 2021.

Massive institutional adoption, growth in altcoins, easier access to cryptocurrency trading, and celebrity endorsements were all cited as possible reasons for the huge spike.

A separate poll by financial service provider deVere Group found nearly half of their more than 700 Baby Boomer (born between 1946 and 1964) and Generation X (born between 1965 to 1985) clients from all over the world already own cryptocurrency or are planning to buy it before the end of 2022.

Nigel Green, deVere Group CEO and founder believes most people born between 1965 and 1980 are investing as…