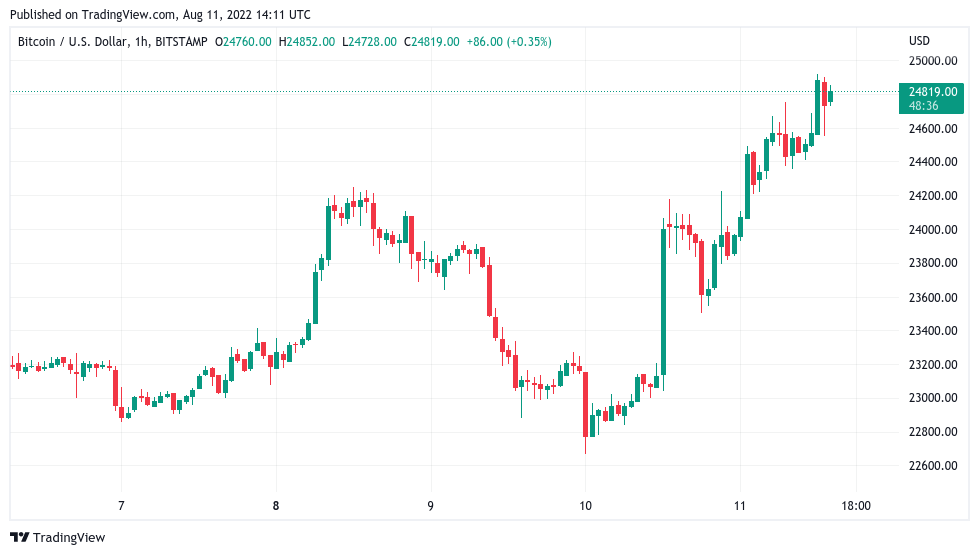 Bitcoin (BTC) continued towards $25,000 on the Aug. 11 Wall Street open amid news that the world’s largest asset manager had launched a BTC product.

Data from Cointelegraph Markets Pro and TradingView followed BTC/USD as it spike to $24,921 on Bitstamp as United States stocks trading got underway.

While going on to consolidate slightly below the highs, the pair inspired confidence in market sentiment, with popular crypto industry figures already seeing positive implications of the BlackRock move.

For Blockware lead insights analyst, William Clemente, however, the news was a landmark event in Bitcoin’s history.

“Last comment on the matter: Think the Blackrock news is probably the most bullish news for a long term Bitcoin holder ever,” he told Twitter followers.

“Not just the news itself, but that it signals to some the water is fine and to others if they don’t offer their clients BTC they’ll get their lunch ate.”

BlackRock’s CEO, Larry Fink, had described Bitcoin just five years earlier as an “index of money laundering.” He had appeared to change his tune by 2020, acknowledging the largest cryptocurrency’s potential to become a “global market.”

BlackRock’s offering would take the form of a spot Bitcoin private trust, it confirmed in a statement.

“The trust is available to U.S. institutional clients and seeks to track the performance of bitcoin, less expenses and liabilities of the trust,” it read.

“Despite the steep downturn in the digital asset market, we are still seeing substantial interest from some institutional clients in how to efficiently and cost-effectively access these assets using our technology and product capabilities.”

As Cointelegraph reported, the firm’s initial foray into Bitcoin this month came via a partnership with U.S. exchange Coinbase.

Turning to potential short-term price targets, the mood among commentators was thus flexible if still not outright bullish.

For on-chain monitoring resource Whalemap, potential upside and downside remained considerable, with $20,000 still not safe as a floor.

“$BTC is breaking out of an ascending triangle on low volatility meaning we should be expecting a big move soon enough,” the Whalemap team revealed alongside a…